Here, my friends, is all you need
to know about Alchemy!

And that reminds me of my favorite Martini story! A true story. Back in 1980, lady

and I (don’t ask) went on a vacation in Bucks County, PA. One afternoon, alone, I crossed a small bridge and found myself in the town of Lambertville, NJ. On the far side of the bridge, I spotted a small restaurant and bar. I went in, then ordered a Martini. Oh, did that hit the spot! But it got better… When the check came, I saw that the cocktail cost only $1.00. Accustomed to New York City prices, this amazed me. So as I paid the waitress I asked her “How is it that this drink cost a dollar?” And she said words forever burned into my memory: “You came in after Happy Hour so I had to charge you full price.” We became good friends over the next few days as I arrived at Happy Hour for a string of 50¢ Martinis.

GET A LOAD OF THIS!
TAROT BEVNAPS!

In A Package of 50, Perfect For Your Tarot-Themed Party!
CLICK IMAGE For Details 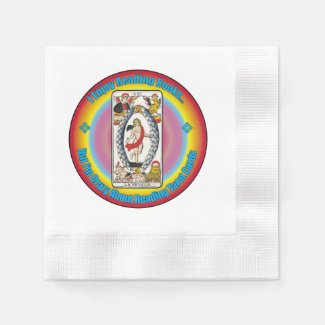 “Now my own suspicion is that the Universe is not
only stranger than we suppose, but stranger
than we can suppose.”  – J. B. S. Haldane

If you think of Alchemy as a bunch of weird old men laboring in a musty castle, wasting their lives in a futile effort to make gold out of lead – you’ve seen too many fantasy films.

Alchemy consists of more than most of us have been tricked into believing. Sure, we all learn about Isaac Newton chopping down the Cherry Tree… I mean, throwing a silver dollar across the Potomac… Uh, no… he never told a lie? No, wait! I have it! An apple bopped him on the sconce and he then got Parliament to pass the Law of Gravity!

history as a giant. His ground-breaking, controversial work in 1672 on the colors that make up the light spectrum almost got him beheaded – at best! Controversial? You bet! You see, up to that time people fervently believed that GOD in heaven created the Rainbow exactly as reported in the Bronze Age fables of the Holy Bible. Hard as it is to imagine today, to people who lived up to and until the 17th Century, the rainbow stood as a visible monument to God’s special love of humanity. People in a troubled world took immense comfort and solace in the sight of the rainbow. Can we, today, imagine the horror and sense of desolation people felt when Newton demonstrated the Prism Effect, showing the world how moisture in the air created the colorful rainbow?

Of all the accomplishments of Isaac Newton, one seems to shame

modern scientists: Isaac Newton practiced and in fact mastered the Art and Science of… Alchemy. Oh, sure, modern scientists grudgingly admit it, but only long enough to tell us that mercury vapors drove poor Ike mad and then killed him. They see that as a blot on his otherwise sterling record, in stark contrast to the establishment’s lauding of Marie Curie’s bravery evinced in her death from aplastic anemia, undoubtedly brought on by her exposure to radiation. Curie remains a martyr of  Science who scarified herself to knowledge, while scientists red-facedly shunt aside Newton’s alchemy as if he were a flasher who enjoyed frightening the bejabbers out demure, virginal young girls in the halls of academia.

Almost all of today’s science exists in a spiritual vacuum, thanks to the Cartesian Deal that neutered science, ceding control of the “spiritual” to the Church of Rome while limiting science to that which people and

machines can measure. If one cannot measure something, it doesn’t exist. The worst part of René Descartes‘ deal still stands: The separation of the MIND and the BODY. The deal may have saved countless scientists from suffering such delightful rites of passage as, oh, BURNING AT THE STAKE, but only at the cost of denying science the ability to examine the most important aspects of humanity, the universe, and life itself. This explains why the fictional Dr. Frankenstein had to do his work in remote castles. The work he pursued would have gotten him not accolades but torture and death. Science to this day shies away from what they dismiss as merely spiritual, as if that were a big nothing. This persists even as Quantum Physics – rejected by Einstein in the same manner with which the Einsteinists previously rejected the Newtonian concept of the Mechanical Universe as an immense collection of Billiard Balls colliding in space.

Alchemy never saw the difference between science and spirituality. The Alchemists sought a fuller, deeper understanding of The Life Force. They knew what science will still not admit: that there is only one living entity in the universe – and everything is part of it. Scientists cannot measure “life force” so… it doesn’t exist. Happily, scientists brave enough to suffer the scorn of their timorous inferiors still operate and present their findings. Going against the almost religious orthodoxy of science scares them not at all. Anyone who tramples on the accepted wisdom faces immense hardships. We need only look at as mundane an example as the work of Barry Marshall. This scientist proved beyond any doubt that peptic ulcers did not come from stress or long nights at the office. He found they resulted from… bacteria. Science scorned him. His work, they rejected. Until he drank a beaker of bacteria and gave himself ulcers, which he cured with antibiotics. Even then, mainstream science rejected Marshall because experimenting on oneself was frowned upon. And, of course, Marshall’s work immediately and forever destroyed the multi-billion dollar ulcer medication market; rendering it deader than vaudeville. But the truth won out and Marshall received the 2005 Nobel Prize For Medicine. 2005… almost twenty years after Marshall’s work showing the peptic ulcer as an infectious disease and not a psychosomatic illness of stress.

See how that goes? Well, part of the dismissal of Alchemy involved spreading the deliberate misinformation that it was no more than a treasure hunt. This is a revealing accusation in light of today’s lucrative Big Pharma, among other branches of science. Is it not today’s science that exists solely for the purpose of achieving fame and wealth? Barry Marshall’s destruction of a lucrative branch of medical marketing confirms that it is, today, the conventional scientists who seek riches and glory. The Alchemists had their collective eye on a much greater prize: wisdom and understanding. Knowledge without wisdom leads to destructive horrors… like this:

Alchemists long maintained that transmuting elements done solely for the purpose of achieving wealth and power would release unthinkable, unimaginable destructive energy. Think that’s nuts? Just take a look into the phenomenon of Nuclear Transmutation… it happens whenever people detonate those monstrous bombs… Meaning, the Alchemists were right!

As you know from the talk in the video above, Alchemy is way more than a cohort of wizened old men decked out in robes and pointy hats trying desperately to make gold from lead. All our modern chemistry stems directly from the labors and discoveries of the Alchemists. So here are two distinctly Alchemical uses of transformation through yeast and bacteria. Each is valuable in it’s own way…

Here’s a bit of Do It Yourself KITCHEN ALCHEMY! Turn a popular soft

drink powder into… wine! Or something like wine, anyway. Long ago I used the Apple flavor to make phony Apple Jack. I was the life of the party. Or so they tell me…
Just click the image below to get the step by step instructions to begin your career as a Kitchen Alchemist!

Not into phony wine? Here’s a bit of
HEALTHY kitchen alchemy:

Make Your Own Yogurt!

Much of the stuff sold today as yogurt is highly sugared and filled with chemicals or thickeners. Yuck! It’s like candied pudding. All you need to make REAL yogurt are FOUR things:

No special equipment is needed – especially if you have a gas range with pilot lights. The oven chamber will be warm enough. Way back in the 1970s, I used one of these things:

But eventually it penetrated into my sometimes thick skull that people have made yogurt for centuries without electricity. Now I make a quart at a time in one of those plastic containers that delis use for soups. Or you can use a Mason Jar. The key to the whole process is CLEANLINESS. You want the good bacteria in the starter culture to blossom – not to rot or compete with other bacteria. When your yogurt is ready it will smell wonderfully tangy! I found a pretty good method on the internet – and added my own notations. For instance, you really only need one tablespoon of an existing Probiotic plain yogurt, not the  quarter cup they suggest. They do that to speed up the process. Why hurry? With a single tablespoon of starter you will have rich, creamy yogurt in 20-24 hours. Using powdered milk, I make several quarts every week and serve it up plain or with cut up fresh fruit. Yummy! And far less expensive than store bought yogurts. You can keep your strain going a long time by reserving one tablespoon from each batch. Eventually, it may “tire” – and then you simply get yourself another Probiotic yogurt and start over.* When you get the system down, it should take only about 25 minutes to prepare the culture. There are short-cuts. I use an Ice Water bath to bring the temperature down from the 180º mark (needed to break down enzymes) to the 110º point at which you add the starter.

*One hint: Before I put my milk mixture into a warm spot to ferment, I HAVE A BLESSING SAID OVER IT and thank the living organisms for helping me. Perhaps that’s why I have managed to keep one strain of yogurt growing for over a year!

This Yields The Best Yogurt I Ever Made – And It’s Economical too!

Contact me any time if you want some help!

Now YOU TOO are a Kitchen Alchemist!
And the gold? THAT comes from the
Money you will save with DIY Yogurt…