“We are born at a given moment, in a given place and, like vintage years of wine, we have the qualities of the year and of the season of which we are born. Astrology does not lay claim to anything more.”  – Carl Jung

“I have studied these things – you have not.” –  Isaac Newton To Edmond Halley when Halley denounced Astrology 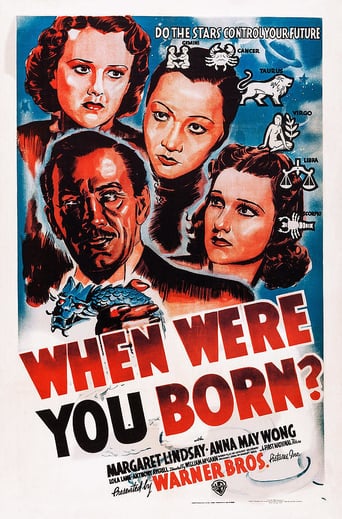 Much to my sorrow, I am not the one to write about astrology. As many of you know, astrology is a weak spot in my learning – to put it mildly! Try as I may, astrology just never sticks in my head. I have no doubt that in a past existence I once had that head lopped off as “punishment” for my Occult leanings… Getting hold of even the basics has been my perennial New Year Resolution – and I will take a shot at it again next year, and again the year after that until I get at least a toe-hold. 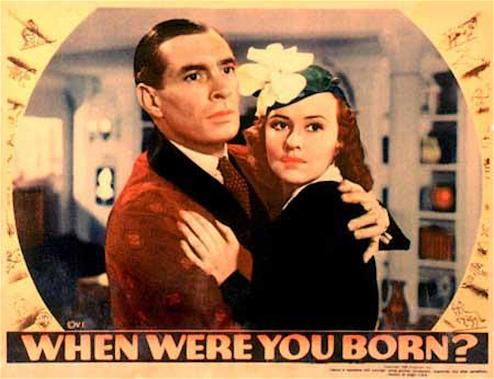 Astrology remains a popular, if bastardized, art. Newspapers know that one of the first features people turn to is their astrology column. Such columns are generally all of the “You Will Meet A Tall Dark Stranger” sort, but people love it. So it strikes me as strange that with such a built-in audience Hollywood rarely touches this subject save for the occasional horror movie.

Way back in 1938, a mainstream Hollywood movie managed to deal in a serious way with astrology. The film was WHEN WERE YOU BORN? a Warner Brothers murder/detective story starring the lamentably forgotten ANNA MAY WONG in one of her most interesting talking picture roles. She plays a strong, intelligent, determined woman, and an Asian woman at that. A very rare moment in movie history, to be sure.

To lend the film credence, the film featured an introduction by noted mystic Manly Palmer Hall (credited, with typical Hollywood disdain for the writer, as… MANLEY). Despite the bizarre and ominous lighting Warner Bros. technicians provided for Hall’s prologue, his intro still offers many insights into astrology.

Note The Sinister “Low Key-Lighting” For What Is A Simple Lecture On The Zodiac. Most Likely From The Trailer, It Does Not Appear This Dark And Menacing In The Finished Film:

The film is, in typical Warner style, short, snappy, and to the point – running slightly over an hour. Yet it manages to include complex story structure, such as Point of View flashbacks, years ahead of the post WW2 vogue for such a device. The producer, Bryan Foy, one of the Seven Little Foys of show business legend, based the movie on an original story submitted by Manly Hall. To widen the films appeal, the studio’s exploitation department relied heavily on the language of the daily newspaper astrologer: 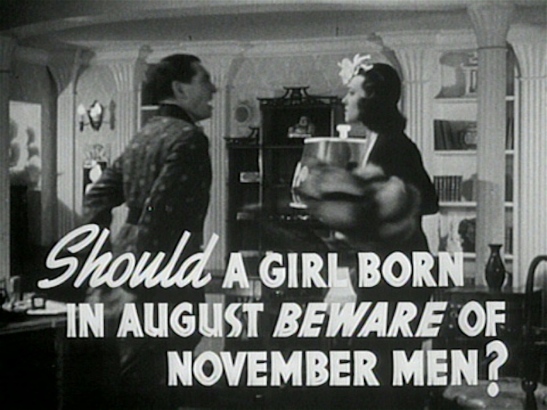 From The Movie’s COMING ATTRACTIONS reel

consideration! As the NY  Times noted in 1938 upon the release of the film “They timed production of ‘When Were You Born?’ the astrological who-dunnit prepared by Manley Hall and the Warners, to start precisely at 10:45 one Hollywood morning, a propitious moment when the sun, Mercury, Venus and Jupiter were conjunct in the tenth house.” But all that is way beyond me, alas…

The studio even held an astrology-themed party while filming. This soirée attracted top 1930s film critics and fan magazine writers.

I look at this film frequently, if only for the nuggets of knowledge I may glean from Mr. Hall’s prologue. Please note, although it strikes the modern ear as wrong, Hall pronounces the sign “LIBRA” correctly. Very few people pronounce it properly…

Here, for your enjoyment, is…
WHEN WERE YOU BORN!