“The Tarot is truly a philosophical machine, which keeps the mind from wandering, while leaving it initiative and liberty; it is mathematics applied to the absolute, the alliance of the positive and the ideal, a lottery of thoughts as exact as numbers, perhaps the simplest and grandest conception of human genius.
“An imprisoned person with no book other than the Tarot, if he knew how to use it, could in a few years acquire universal knowledge and would be able to speak on all subjects with unequaled learning and inexhaustible eloquence.”
– Eliphas Lèvi Zahad

Just like everyone else, I also had a “first time” experience with Tarot. The first person to show me Tarot cards, and demonstrate what a skilled reader can do with them, was a gentleman named Earl Scott. I was no more than 16 back then and spent time around a somewhat Bohemian group of adults here in New York City. Most, clearly, were poseurs and several had inserted themselves into the orbit of the daughter of a noted maker of documentary films – all desperately hoping to spur a career of their own through this woman. I watched this circus and learned about life. Such people scheme and plot to attain “success,” and they never think of simply doing the work and getting ahead that way. But within that group I did find a few people you could call the genuine article.

The Start of HAIR: at the Cheetah Disco

A brilliant young Hollywood cinematographer who later died all too soon… some noted writers and actors (this was the mid 1970s, the Heyday for Off-Broadway and Off-Off Broadway before Actors’ Equity ruled the little theater groups off limits). And there was also Earl Scott who had been one of the brains behind a cultural phenomenon called… HAIR. To this day, “Scotty” as everyone called him, holds a unique place in theater history. If you have an old Playbill for HAIR, you will see his official show credit – reproduced here from Scott’s listing at the Internet Broadway Data Base:

Yes, in all of Broadway, you won’t see a credit like that aside from Scott’s! We all would congregate in a saloon in the old New York Flower District where the wholesale plant merchants clustered. It’s a peculiarity of New York that businesses clustered. We still have The Diamond District. We lost most of The Flower District, the Fur District barely remains, and both the Camera District and the Radio District have long since made way for new technology. But that saloon was The Botany Talk House, aptly named, and there I learned to play Backgammon and acquired the taste for Bourbon in a half-filled mug of hot water on cold nights. And Earl Scott freely read cards for everyone who asked at the big table we all shared. I saw the wonders of card reading every night! Here is a shot of the saloon from the 1979 film LAST EMBRACE. 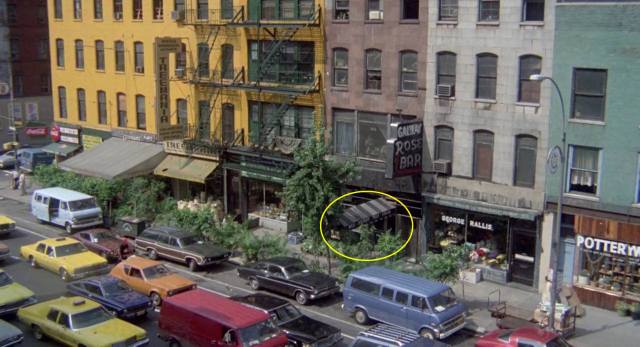 BTW, the George Rallis flower wholesale shop is still in business to this day. Some day, maybe over Bourbon and hot water, I will tell you how that business and those days played a role in my marriage in the mid 1980s…

Those were truly exciting days in NYC! Especially in the Chelsea area in which the Flower District was located. Small theater groups had space to produce experimental shows… everyone could easily afford an apartment or even a

capacious loft… This was the way of life that attracted artistically inclined people from all over the world. I didn’t know it at the time, but it would all soon end in an orgy of Real Estate speculation that started the slide from what was always an expensive place in which to live… to the impossibly expensive place we have today with few young people able live in their own apartment. Today, 4 and 5 roommates are the rule. No, I didn’t know it at the time. I wonder if Earl Scott, with his ever-present deck of Rider Waite Tarot cards, knew it?

That is how I first encountered tarot. I started on a path back then without even knowing it. A path that led me to an empty apartment in 1982 – empty save for a chair, a sofa-bed, and a copy of a book on tarot. I read it and my fate was sealed! It was a low-point in my life but turned out to be the vehicle to finding out who I was. All things in my life sprang from that empty apartment. And when I found that book – just waiting for me! – I only knew what Tarot was because of Earl Scott.

Do YOU want to learn to read tarot?

From A Chapter In The Book/CD Set:
REV. ELIOT’S MAGICKAL WINDOW

With the Major Cards, we arrive at the Jewel in the Crown of the Tarot. The Major

Cards consist of those 22 mysterious looking cards that so often attract people to the Tarot in the first place. These cards hold such great importance that some Readers use only the Major Cards, not the entire pack, for their sessions.

The images on the Major Cards speak to us from the depths of time, going back at least to the 14th Century, if not hundreds of years earlier – depending upon whose origin story you read. In our increasingly “modern,” and impersonal world, the Major Cards rank among very few relics of the distant past available to us substantially unchanged in form. On this basis alone we must not ignore them.

The Major Cards have several other names: the Major Arcana, the Trumps, or the Major Keys. Tarot experts do this to confuse you and keep you from learning. I really mean that. But knowing these names can help you recognize other people who know about Tarot. For instance, we all know that in New York City we have a real estate “developer,” TV personality, and publicity-seeker named Trump. Well, a few years back a segment of the long-running (and eternally rerunning) NBC-TV show “Law & Order” told the fictional story of a New York real estate developer who gets murdered. They did not name the character “Trump.” They named him “Keyes.” Coincidence? Or does some TV writer out there in LA know a thing or two about the Major Arcana?

You won’t find the Major Cards/Trumps/Keys/Arcana cards in our regular deck of fifty-two playing cards. In addition to these missing cards, four other cards do not exist in modern decks. More about those later. For most people, the entire allure of Tarot lies in the mysterious images of the Major Cards/Trumps/Keys/Arcana (Okay, okay. I promise not to do that anymore). With such names as The Hanged Man, The Hierophant, The Hermit, and The Fool, these cards tantalize us; they call out to our inner consciousness provoking weird, thoughts. The Major Cards invariably show up in movies when the writer needs a cryptic, eldritch image. Remember Roger Moore’s first James Bond Movie, “Live and Let Die”? Tarot appears throughout this film. The highlight comes when Bond uses a stacked Tarot deck to seduce a comely seer named Solitaire (also stacked). For this profane purpose, Bond compiles a deck composed entirely of the Major Card called The Lovers. Well, here’s something you may not know. Although Solitaire sometimes reads the Rider-Waite-Smith deck in the movie, the producers commissioned a new deck especially for the film. The noted Scottish Surrealist painter Fergus Hall designed a beautiful set of Tarot cards,

which remains available today as the “Tarot of the Witches.” In several scenes Solitaire uses this Hall deck. When the movie came out, the deck had the name “007 Tarot.” Why do I mention this? The next time you see “Live and Let Die,” look very closely at these cards when Bond or Solitaire turns them over (freeze the video frame). On the back of each card, plainly visible, you will find a design pattern reading “007!” Right there in the movie! So Bond goes to a shop, asks for 78 complete Tarot decks, tosses out all the cards but The Lovers (a very wasteful and expensive proposition), creates a new stacked deck, and this super-agent, this master spy, does not notice that every single one of 6,084 cards he bought carries, on the back in big red letters, his top-secret MI5 designation, his clandestine license to kill, his friggin’ DOUBLE-0 number (see the picture grabbed from the movie)! Thanks, Roger Moore. I ask you, would Sean Connery have done something so downright… stupid? Not even George Lazenby…

Want to find out about Tarot?
CLICK THIS IMAGE

OR:
Fill out this form:

Yes, Rev. Eliot! I want you to show me
How to read Tarot Cards!

Show You Have Tarot Skills
With These Ceramic Coffee Mugs!

Click The Picture To Go To Rev. Eliot’s Store For These Colorful Mugs And An Assortment of  Many Other Fine Tarot-Themed Items

Do you have a copy of
REV. ELIOT’S MAGICKAL WINDOW?
There Is A Mistake On Page 34!
CLICK HERE
To Get The Erratum Sheet!
Print It And Put It In Your Book
To Correct The Error