Magick Mirrors bring to many minds… Disney! As with most folk legends, however, this has a basis in fact.

For centuries, people have used the Magick Mirror – a black mirror that does not reflect – to look at themselves, but deep, deep within. It is said that Nostradamus himself used a black scrying mirror to see into the future. In truly ancient times, scryers would drop a deep black oil into water and study that. Eventually, scryers developed the glass mirror as we know it today.

Magick Workers employ these mirrors for SCRYING, a form of visualization such as we also do with crystal balls.

One may obtain a simple piece of obsidian, rounded off…

Or an ornate framed mirror… 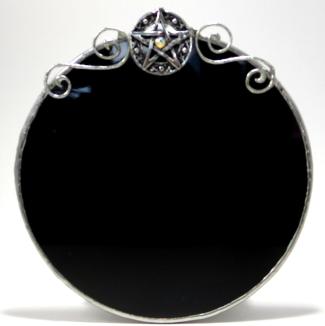 Rather than purchase a mirror, anyone can make one. We can easily find simple instructions on-line. At its simplest, this requires nothing more than a concave piece of glass which we then spray on the bulging side with a black matte paint. That’s it. Then you can design a frame or put it in a simple easel.

Should you not wish to make a mirror, you can see a fine assortment of ready-made mirrors at most occult supply shops. This kit – now out of print – still turns up on sites like Ebay and Amazon. It has a Black Mirror, a stand, a fine book and a CD with several meditations for various types of scrying operations:

New and sealed, this runs over $100. That appeals to collectors who will never open it. What a shame! Used, bargains do turn up but generally it will run about $35-$50. HINT: If you buy this used, CLEANSE IT RITUALLY. Sage works well. Splashing with a bit of your personally made Holy Water and placing the mirror in the moonlight for charging also helps in cleansing.

But that’s just the start! Using the mirror is where the action is.

Here is a classic text to get you going!

The Magic Mirror
By Franz Bardon 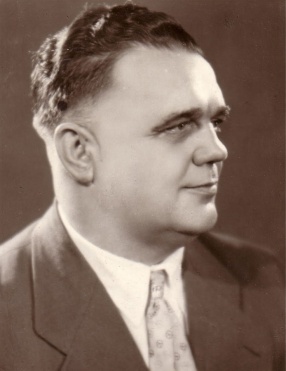 The use of magic mirrors for purposes of ritual magic has, up to now, been scarcely recommended in books on magic, since only a very limited number of initiates have been acquainted with the correct application of fluid condensers with regard to mirrors, and these initiates have kept it a great secret.

The magic mirror is a magical aid that is not absolutely necessary, but the magician will always appreciate it as a good support in his work, especially when operating with powers or beings of minor intelligence.

In some cases the magic mirror may even replace the magic triangle. A magic mirror provided with a fluid condenser is of great advantage, but if the magician has no such condenser he will be able to do without; that is, an optical magic mirror will suffice.

I have given a full description of the use of the magic mirror in a separate chapter of my first book “Initiation into Hermetics,” therefore I shall only say something about the purpose which a magic mirror is to serve in connection with evocations and in what way it may facilitate that work.

In ritual magic it may be used for the following purposes.

1. To get into contact with powers and beings and to make them visible. For this purpose, the magic mirror is either placed into the triangle, or what is of even greater advantage, fixed to the upper point of the triangle, on its outside. The charging or impregnation of the mirror with the desired power comes next. Employing your imagination you must concentrate your desire for the thought purpose into the condensed power – volt – before the actual evocation.

2. The magic mirror may, secondly, be used for space impregnation in which case the necessary dynamics will automatically be preserved during the whole period of evocation without the magician needing to pay particular attention to it, thus being able to concentrate fully on the other phases of his ritual, for instance, on the materialization or the clairvoyance.

In such a case the mirror is to be placed into a corner of the room, so that its influence will work on the whole space of the relevant magic operation.

3. The mirror may be employed as a magnetic force for attracting the being that is to be evoked. To effect this, the surface of the mirror must be charged with a fluid condenser facing the direction in which it is to operate. The mirror has then to be placed into the centre of the triangle or at the top of its upper point.

4. Furthermore, the magic mirror may be used as an accumulator or condenser – so that much qualitative and quantitative power can be accumulated as to enable the being evoked to bring about the desired effects.

It does not matter if, in this case, the being is to be transformed by the help of the condensed power into a visible shape or if some other result or effect is intended. All this actually depends on what the magician wishes or desires to achieve.

5. Moreover, the magic mirror may replace a telephone. For this purpose the fluid condenser must be charged with the Akasha and a timeless and spaceless state has to be created by the force of concentration. The evocation then has to be spoken into the mirror. The magic mirror thus becomes an astral channel of communication. Not only is this the magician’s method for calling before him a certain being or power; the being itself is able to talk to the magician out of the mirror.

The magician may thus sometimes hear the being’s voice not only mentally or astrally, but also physically, as if it were speaking through a loudspeaker. In principle it will, however, be up to the magician to choose the sphere in which the mirror is to operate.

trained in magic to hear the voice of a spirit. Of course, two magicians, equally well-trained, may, if they choose, converse with each other over the greatest distances, – not only astrally and mentally, but also physically – by this mirror method, and they will hear, if they like to do so, every word through their physical ears.

6. There is still another purpose the mirror may serve in ritual magic: for protection against undesired influences. The condensation of light usually brings this about. When charging the mirror the magician has to concentrate on his desire to keep off all undesirable influences.

The power of radiation of a mirror charged in such a way must be great enough to prevent any larva, phantom, etc., from coming near the space in which the magician is operating; they must not, under any circumstances whatsoever, penetrate into this space.

Also in this case the mirror has to be thus placed that it radiates the whole room or space in which the relevant magic operation is carried through.

In general, the magician will have his mirror serve only one purpose. He will only apply it for that type of problem that seems to him the most difficult one. In ceremonial magic, the magician may, if he likes, use more than one magic mirror as a magic aid, in order to attain his goals and facilitate his work.

So there you go! That should get you started in the world of Scrying.
Should you desire more information, shoot me a message.
Just click the wizard!

For The Advanced Student

The Dark Mirror in Medieval
and Renaissance Magick 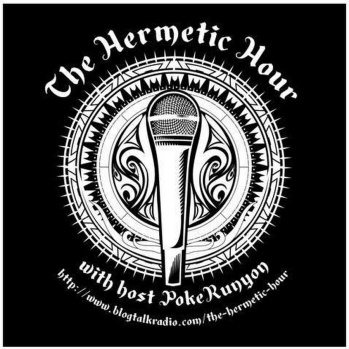